During 2016, Jacee and her SLA lab team of dedicated graduate student researchers are finally in a position to start analyzing their results. 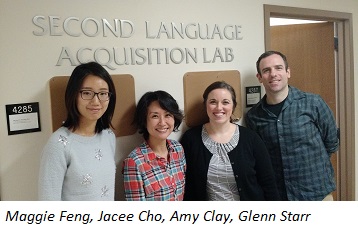 Preliminary results of this project were presented at the conference on Generative Approaches to SLA in Southampton, England in April, 2017. Jacee hope the results of this research will provide content for several publications coming out this year and next. The project is supported by two research grants from the Office of Vice Chancellor for Research and Graduate Education and the SLA summer faculty-student research partnership program.

At the organization’s annual meeting in February, Dianna received the American Association of Teachers of Slavic and East European Languages 2017 Award for Distinguished Service. Earlier in the year, she was awarded the 2016 UW-Madison College of Letters & Science Academic Staff Mid-Career Award. 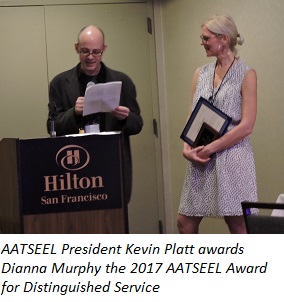 Dianna’s recent publications include Exploring the US Language Flagship Program: Professional Competence in a Second Language by Graduation, co-edited with Karen Evans-Romaine. She is currently working on a study of the gender and race/ethnicity of U.S. undergraduates who majors in languages other than English.

Katrina was promoted to full professor this year. She received a Vilas Life Cycle Award from the Women in Science & Engineering Leadership Institute for a new project, “Progressive Muslims through Discourse,” a multi-sited linguistic ethnography, attending meetings of progressive Muslim groups and conducting interviews. Katrina’s language-focused publications this year included a review of Language, Globalization and the Making of a Tanzanian Beauty Queen (by Sabrina Billings) in Language in Society. She also finished a book, Popobawa: Tanzanian Talk, Global Misreadings, forthcoming from Indiana University Press. Her 2016 courses included a seminar in Literary Ethnography; Theories and Methods of Learning a Less Commonly Taught Language; Multilingual Seminar; and Communicative Lesson Planning. She was recently selected to serve as Specialist for Swahili for the first year of UW-Madison’s core partnership in a Mellon-funded LCTL Partnership with Michigan State University.

Kate Vieira was promoted to associate professor with tenure in 2016 and joined the SLA PhD program as a core faculty member. Her book American by Paper: 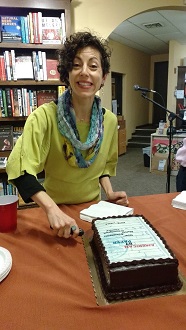 How Documents Matter in Immigrant Literacy was published last year and publication was celebrated with a party at A Room of One’s Own bookstore featuring a cake decorated with the book’s cover.

Kate has also received a Spencer/National Academy of Education postdoctoral fellowship and a Vilas Associates Award to complete a manuscript for her second book about literacy learning in immigrants’ homelands. Kate’s graduate courses include: Writing and the Global Movement of People (English 706) Perspectives on Literacy (English 702) Qualitative Methods in Writing Studies (English 703). She teaches a new graduate seminar called Writing, Healing, and the Body based on a new strand of research about writing’s potential to heal.