It is done, data collection completed!

I spent several months in France between September and June of the 2015-16 academic year, conducting an ethnographic study in a high school. My goal was to observe how Franco-Maghrebi students negotiate their identities within the French education system. 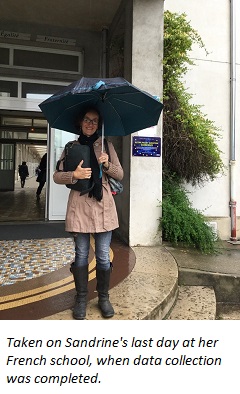 My first trip in September 2015 was wonderful. I left France more than 20 years ago, and it was my first time spending more than a few weeks at a time in my native country. I stayed with my mum, enjoyed her food, spent time with my brothers, went out with my high-school friends…it was like travelling back in time. I joked that I was going to start going out to the disco again. Luckily, my daily conversation on Skype with my husband and two children kept me real.

The beginning of my research went extremely well. I recruited 10 participants, and 2 French literature teachers expressed strong interest in my work and fully cooperated with me by letting me come and observe my participants in their classrooms anytime.

I had initially planned to go 3 times, once in September, then in January and in April till the end of the school year. However, I had a back surgery in January and had to cancel my second trip. This was a big blow, but as my advisor told me, research plans are often different from what actually happens. Going back in April, I was in a lot of physical pain, and very anxious that my participants would have lost interest and dropped out. But I was wrong, ALL my participants were still in, they were very happy to see me and that kept me going, despite the back pain. 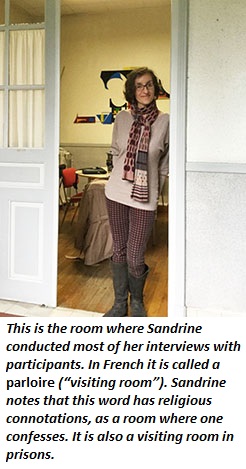 Leaving the field was not easy as I had developed friendly relationships with some of my participants. I was so grateful for their time and kindness, but in the end, some thanked me, and said that taking part in my research had been a very positive experience because I asked them questions nobody had asked them before, I listened to their struggles like nobody had done before. I am still in touch with one of the teachers, and we are hoping to hold a symposium on the theme of diversity in the school. This would be a great way to give back to this community who gave me so much. It was a wonderful, humbling, frustrating experience, but I have learned a lot about fieldwork, my participants, the context and I am even more convinced that my research is needed. Now I just need to write it up!